More than 70 years ago, a young Chicago Water Department engineer named Dave Davis realized that existing valves did not adequately serve expanding municipal water systems and their increased capacity. A better pump control valve was needed. In 1926 Davis introduced the Cone Valve, the first conical plug valve. He later improved on the Cone Valve design in 1949 with introduction of the world’s first rotary Ball Valve, which would go on to become the Willamette Ball Valve. The brand is recognized as far superior to resilient seated ball valves, and is trusted worldwide for its performance and reliability. 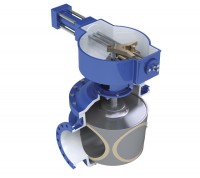