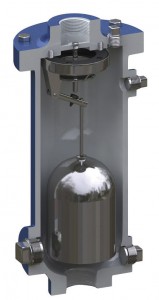 Operate same as Air Valves for Water, differing only in appearance with elongated taller bodies. Elongated bodies minimize clogging by permitting use of a much longer float stem, to prevent the sewage from fouling up the mechanism. For ease of maintenance, Flushing Attachments are recommended with the Valves, as shown. When adding Sewage Air Valves to your pipeline, the same criteria applies, as with the standard Air Valves. However, the potential for air entrapped with Sewage pipelines, is even greater than that found in water lines, because Sewage media generates large quantities of gases. Therefore, it is recommended each high point be protected with an automatic Sewage Air Release Valve.