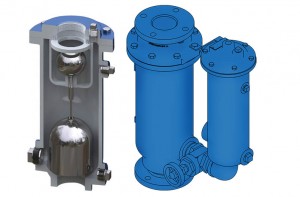 Sewage Air/Vacuum Valves utilize two floats, each connected to a common stem which is guided through a bushing. The upper float shuts off instantaneously against the seat, due to the impact zone and lifting force of the much larger concave bottom float, as sewage media enters the valve body. Once closed and pressurized, the Air/Vacuum Valve will not open to release air. It will open under negative pressure allowing air to re-enter and prevent vacuum from forming in the line.

The Dual Body Combination Sewage Air Valve automatically releases collected pockets of air will through the small orifice automatically while pressurized. Should a vacuum develop in the force main, both orifices open to permit large volumes of air to re-enter and break the vacuum.

The air gaps prevent waste solids from clogging the upper shut-off float of the large orifice and the lever mechanism of the small orifice valve.